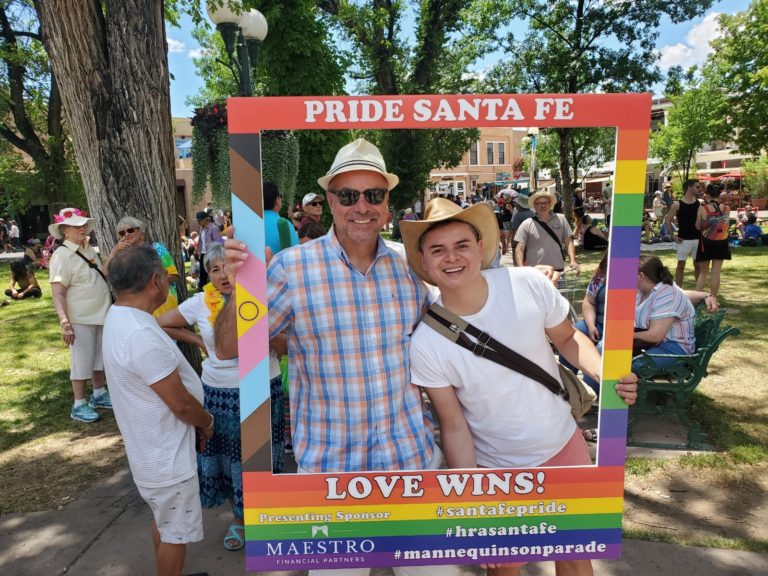 The most satisfying part about matching people with their new homes is the relationship that I get to make with homebuyers. There’s something to be said to being the first person in town to know some terrific new neighbors. But when you can say that the castle you helped your new neighbors find would set the stage for their happily ever after—well, that takes job satisfaction to a whole new level.

Some trips down the aisle take longer than others. But for Wayne Siefert and Alex Vidal it would take 17 years, a pandemic, and a 1900-mile voyage to Santa Fe to say their “I do’s.” And now, happily settled in the dream home in the hills, they’ll both admit that it was all worth the wait.

Wayne and Alex’s story started in the suburbs of Philadelphia, where Wayne grew up. They met, became a couple, and within five years started a business together that creates green specialty packaging. Wayne focuses more on the business, which he’s able to run remotely from New Mexico, while Alex has continued his career as a high school Spanish teacher.

Although they loved their life together in Philly, they felt things in the Keystone State becoming more conservative politically. “We just didn’t belong there anymore,” Wayne says.

The decision to move to New Mexico wasn’t difficult.

“New Mexico, not just Santa Fe, has been dear to my heart for many years,” Alex remembers. “I went to the balloon fiesta in Albuquerque when I was in high school and, at the time, people told me, ‘If you think this is pretty, you have to go to Santa Fe.’”

Like a lot of people, Wayne and Alex made some big life decisions during the pandemic.

“We came to visit during Easter Break of 2021 and quickly made the decision to move here,” Alex recalls. “Wayne can basically work from anywhere. So, I applied for a teaching position at a private school here, we put our house on the market and said, ‘Let’s go!’”

House Hunting with a Difference

With their minds made up to move, it was time to find a home. They began doing their research. “Mark’s name kept popping up,” Alex says. “We never had an experience like we did with Mark Banham. We reached out and he called us on a Saturday morning and we just talked for a few hours. He really gave us a perspective on the community,” Alex remembers.

He speaks from experience. Over the past few decades, the couple have bought and sold multiple properties. “It never felt like talking to a realtor, but more like a friend. It was an amazing experience.”

Like a lot of couples, Wayne and Alex had a general idea of their dream house, but what they found was slightly different, but even better, than they imagined.

Initially they planned to buy property and build in Santa Fe but had second thoughts and began looking to buy an existing property. “Mark was so kind to show us different types of scenarios. We looked in a number of neighborhoods, but when we saw the house, we eventually purchased, we knew it was the one we wanted,” Alex says. “Actually, it already had an offer, but Mark reached out to some contacts and made it happen for us in 24 hours.”

Built on multiple levels in a Santa Fe style, the property in the hills features multiple patios and alcoves, an octagonal porch, large glass windows, a formal dining room, fireplace, amazing views of the Jemez, and opportunities to add their own spin to the property, Alex says. “Everywhere you go in the house you find intimate little patios.”

A Sprint Down the Aisle

Along with their new home and new city, Alex and Wayne also took on new marital status. After 17 years together as a couple and business partners they finally tied the knot. And just like their quick move to Santa Fe seemed pre-ordained, the breakneck pace of how events ended with them saying “I do,” was equally in the cards.

“We just got married a month ago,” Alex beamed. “We weren’t really planning on it. We made the decision and decided to pick up the license and went to the courthouse downtown.”

Then things went into overdrive. “At the courthouse, the clerk asked me, ‘Are you getting married today? If you’re looking for someone to marry you, we can call Judge Cordelia Montoya the judge.”

“So, we leave the courthouse, and she calls us back. She says, ‘I’m at the Plaza. Get over here in five minutes and I’ll marry you.” And she did.

New Friends and a Happily, Ever After

With a new home, new job and new marital status checked off their To Do list, all Wayne and Alex had left to do was make some new friends. Luckily, Pride was just around the corner. It was my privilege to give this pair of Santa Fe debutantes a proper “coming out.”

“It was our second weekend in Santa Fe, when the Pride celebrations were in full swing,” Alex recalls. “Mark graciously invited us to join him and his friends who were celebrating at the Plaza. It was there where Mark introduced us to so many wonderful people. We had an incredible time, getting to know them and it was very nice to feel welcome in Santa Fe.”

Wayne agreed. “Mark is truly a remarkable person,” he said. “After Pride, he’s invited us to his home on several occasions where we connected with new friends. We appreciate his friendship and his willingness to make us feel part of the Santa Fe community.”

Today with new friends and their second act in full swing, newlyweds Alex and Wayne are enjoying all that their new city has to offer.

“We’re very outdoorsy people and love the fact that in Santa Fe you can be at the ski area going for a hike in 10 minutes.”

“Wayne plays pickleball and loves the fact that Santa Fe has a pickleball club. He’s going to tournaments already. There is a sense of community you find here that you don’t find in other parts of the US,” Alex says.

As a lover of the arts, Alex has found heaven on earth. He especially loves spending his days meeting local artists in Santa Fe. And at night he and Wayne happily settle into their dream home.

“I think it was an amazing deal,” Alex said. “I’m still pinching myself.”