Aiming to Be NM’s First Out U.S. Rep, Blair Brings Years of DC Experience to Campaign 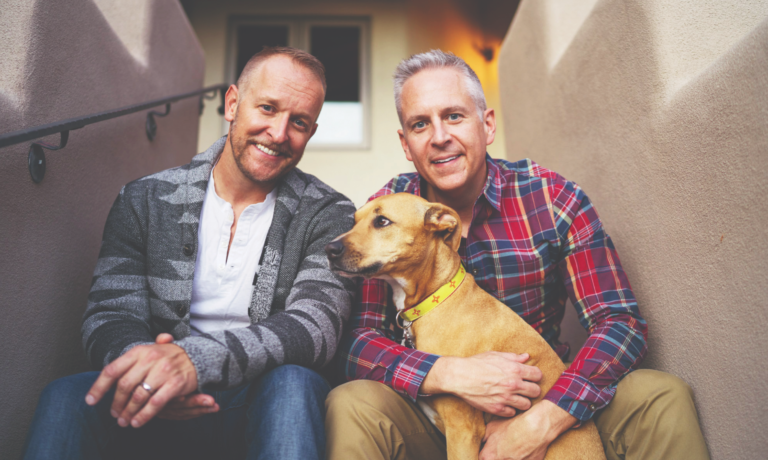 While this piece is not an endorsement, we are excited to have a highly qualified LGBTQ candidate running for the Democratic nomination in Northern New Mexico’s 3rd Congressional District and hope this short profile gives readers the opportunity to learn more about John Blair.

In the summer of 2016 while in the final months of his job working with the Obama administration’s Department of the Interior, John Blair played a key role in having New York’s Stonewall Inn, the birthplace of the modern LGBTQ rights movement, designated a national monument.

Three years later, Blair is preparing to once again make history. Having declared his candidacy for the third U.S. district seat representing northern New Mexico’s 3rd congressional district, Blair is running to become the first out LGBTQ member of congress from New Mexico.

It’s been an interesting road that led Blair to the campaign trail, one that was largely facilitated by his husband of five years, Billy Black.

Black, an IT professional and native New Yorker, fell for Santa Fe’s charms when he first visited here with Blair some years back. When Blair’s job with the Obama administration came to an end in 2016, it was Black who was instrumental in the decision to relocate to New Mexico where Blair grew up.

“Billy fell in love with Santa Fe. He even started sending me listings for houses while we were still living in Washington,” Blair says, laughing. “For me, I love everything about Santa Fe, right down to the smell of the air during monsoon season.”

After relocating to Santa Fe, in 2017 Blair wasted no time in getting involved in local causes. He’s on the board of CASA Q, a shelter for LGBTQ homeless youth in Albuquerque, and has been focusing on raising money for a second CASA Q shelter, perhaps in Santa Fe.

“CASA Q becomes a second home for the youth,” Blair says. “This work is essential because we still have other shelters in Albuquerque that tell LGBTQ youth it’s their fault if they’ve been physically or sexually abused.”

Part of Blair’s fundraising efforts for CASA Q involved his and his husband’s favorite work out spot, OrangeTheory on Cordova Road. Last June, as part of Pride Month, Blair convinced the popular facility to host a fundraising class event. “We raised $3,000 in 90 minutes,” he says. Another fundraising-related item that Blair claims bragging rights to is in how his current campaign is being financed, free of any Corporate PAC money.

And while activism is his passion, government appears to be in Blair’s DNA. His impressive political resume includes early work in the judicial branch with New Mexico Supreme Court Justice Edward Chávez.

He continued his career in government working with then U.S. Rep Martin Heinrich’s office where he played a role in revamping healthcare and making it easier for Native Americans to buy homes on tribal lands. His work as the Director of Intergovernmental and External Affairs at the Obama administration’s Department of the Interior helped shape the Paris Climate Accord.

He’s such a political animal, he even named his dog, a pit bull/hound mix, “CJ” after Alison Janney’s character on TV’s The West Wing.

Since returning home to New Mexico, His long-standing friendship with New Mexico Secretary of State Maggie Toulouse Oliver led to him working in her office. Together, they worked tirelessly to pass same-day voter registration and automatic voter registration when someone applies for a driver’s license.

“It’s all about making it as easy as possible to vote and register to vote when it works for you,” Blair says. “This is a mission I plan to carry back to DC.”

But Blair’s campaign isn’t solely focused on election reform. He believes that the diverse Third District that he hopes to represent will unite behind his dual mission to curb climate change and bring jobs to the state.

“There’s a huge economic opportunity to make this district a clean energy shining star,” Blair says noting that New Mexico is among the country’s top ten most promising states for renewable energy.

“We have tremendous potential for wind and solar energy,” he says. “In many areas we’re losing our young people due to lack of jobs. We can go to towns like Clayton and put up wind turbines and create good jobs that will allow people to live in these communities and thrive.”

Out to Make History

So why is Blair aiming for a return to Washington, DC after only recently relocating back to his native Santa Fe?

“Now seemed the right time for me to get involved in terms of running,” Blair says of his return to national politics. “What motivates me is that we have republicans in Congress who care more about NRA lobbyists than kids getting shot in schools. We’ve got Big Pharma corporations making billions in profits while New Mexicans still pay too much for prescription drugs. I’m ready to jump in and right these wrongs.”

“When I get elected, I’ll be the first gay person elected to Congress in New Mexico,” Blair says. “We’ve made progress, but I think the LGBTQ community is still under-represented in elective office at all levels. The quest for equality for all minorities continues.”

More information can be found at JohnBlairForNewMexico.com.