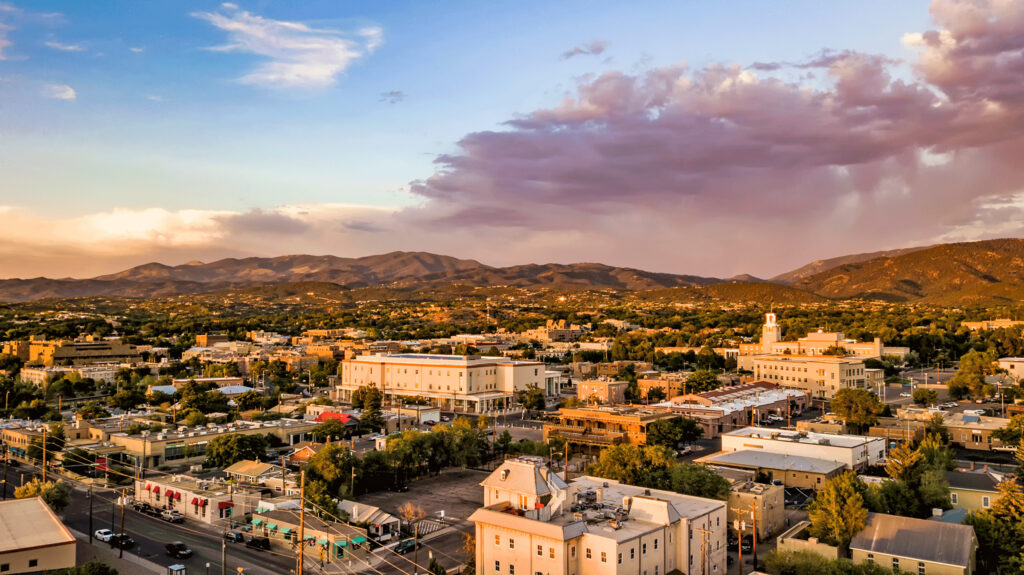 Santa Fe is often called “The City Different” and that certainly applies to Real Estate. Santa Fe is composed of many charming, historic areas, right in middle of the town or right near the Plaza. There are also a number of newer developments in the southwest part of town. Trying to figure out where to buy a home can be a little daunting if you don’t know where to look. Every neighborhood has its own set of characteristic and charm. There is definitely one that fits you but knowing which one can be hard. There are a number of neighborhoods to navigate so it’s good to have real estate agent that knows Santa Fe inside and out. Read through the neighborhood pages then follow up with me if you have any questions.

Property located within “walking distance to the Plaza” is highly desirable, though there’s not a lot of residential property available and very little new construction. You’ll find older homes, historic properties, and condos such as The Reserve at Santa Fe and The Lofts at Marquez Place.

The east side of Santa Fe encompasses the Canyon Road area. The Historic Eastside begins on the east side of Paseo de Peralta and runs up into the foothills of the Sangre de Cristo Mountains. On the north, it is bordered by the Santa Fe River and on the south by Old Pecos Trail. Canyon Road is the heart of the Eastside with art galleries and adobe houses that were prototypes for “Santa Fe Style”.

On the edge of the downtown, the south Capitol district offers a variety of architectural styles, including Victorian homes and Arts & Crafts-style bungalows. Many of the older properties have been restored or are undergoing restoration. Lots vary from 60 x 100 foot parcels up to an acre or so. The bungalows near the Capitol are more often frame construction than adobe

This South Capitol stretches south from the State Capitol complex west of the Old Santa Fe Trail. It goes all the way to the St. Vincent Hospital on the south and St. Francis Drive on the west.

Closely nestled homes now dominate the streetscape. Many houses still retain the quaint vernacular style favored by the industrious and humble original inhabitants. Though interspersed with new homes or up-to-date renovations, the neighborhood retains much of its old character and charm. This stretches from Guadalupe Street west to St. Francis between Cerrillos and the Santa Fe River.

Historically, the Guadalupe neighborhood grew along the “Camino Real”, the road back to Mexico and eventually to Spain. The landmark Santuario de Guadalupe was the last place travelers stopped to pray for safe passage and drink from the Agua Fria well as they embarked on the trail.

Travelers, stock and wagons gathered and supplies were unloaded here after the perilous journey from Mexico and Spain. Later, the Santa Fe Trail then, the railroad, terminated in this neighborhood.

The area is expanding with renovation of a district called The Railyard district, home of the historic Santa Fe Southern Railroad, and featuring live-and-work studios, shops and galleries and a fresh new energy. The Railyard is one of Santa Fe’s most vibrant up-and-coming areas.

The North Hills rise from Paseo de Peralta and are bordered by Old Taos Highway on the west, the Sangre de Cristo Mountains on the east and Tesuque on the north. The terrain is rolling with small pinons and juniper further uphill, and culminates in the mountains with spruce and ponderosa pines approaching the Ski Valley. Tesuque is an area of riverbed and meadows, pastoral and picturesque. The Gonzales and Cerro Gordo Road areas are reminiscent of the Eastside dirt roads with houses ranging from humble to expansive. The Old Taos Highway corridor includes condos and homes on one-plus acre lots. Like the countryside, the real estate becomes more impressive (and expensive) as the elevation increases. Primary subdivisions on Hyde Park Road (the road up to the Ski Valley) are: The Summit, Hyde Park Estates, Los Cerros Colorados and Sierra del Norte.

Just a few minutes from the Plaza, this area of town have smaller homes with Santa Fe features and a neighborhood feel. There’s been a resurgence of interest this area—much of which was developed in the 1950s and 60s.

In the Casa Solana subdivision, many of the houses were built by Allen Stamm. “Stamm” homes have a reputation for being well built.

Further-out (although only about 10 minutes) areas with more land and expansive views, such as Puesta del Sol. The West Alameda district has many advantageous features such as proximity to downtown and many view lots. The West Alameda district extends from St. Francis west out both sides of Alameda and is bordered by the Santa Fe River on the south and by Paseo de Vista on the north.

Six-minute drive from the Plaza is two of Santa Fe’s most prestigious communities: Las Campanas and La Tierra. Las Campanas features two Jack Nicklaus-designed golf courses, an equestrian center, and an elegant clubhouse. Homes in La Tierra and Las Campanas homes represent contemporary Southwest-style architecture and design at its finest. Lots range from one acre to 20 acres. Prices range from $500,000 to $2+ million. Also located in the Northwest is the community of Aldea, a diverse neighborhood consisting of single family homes, town homes and garden homes.

This area lies east of St. Francis and generally south of Garcia St. within the City limits. The Museum District and on further out Old Santa Fe Trail includes some of the most incredible property in the city. Lot sizes vary from about 1/2 acre to more than five, some with stunning views. Here, one finds homes of all sizes and types.

DeVargas Heights lies east of Old Pecos Trail near Zia Road. It is a mature subdivision of moderate priced ranch or pueblo style homes on lots of about 1/5 to 1/2 acre. You will find homes of about 2,000 square feet, some dated, some renovated, and some new more expensive homes.

To the west of Old Pecos Trail lies Sol y Lomas. Here lots are 1/2 to over 1 acre. There’s a country feeling with pinons providing privacy from neighbors. Homes, often over twenty years old, are usually well kept, some ready for remodel, and some updated. Sizes vary from about 1,800 square feet to over 3,000. Also located on Old Pecos Trail is the private and gated community of Villa Leyba.

Quail Runis a gated 9-hole golf community with exercise, meeting and restaurant facilities. A variety of town homes and single-family homes are available for part-time or full-time residents.

This area is located southeast of the city, in the foothills of the Sangre de Cristos, along both sides of I-25, and out as far as Eldorado and the US Highway 285 junction.

Home prices vary considerably depending on views, terrain, and the specific neighborhood.

It’s well located near schools, parks, and shopping. The Santa Fe Community College is nearby, as is the Chavez Recreation Center and the Villa Linda Mall.

The Southwest is bordered on the east by St. Francis Drive and on the west by Cerrillos Road and extends south out Airport Road.

The La Cienega/Highway 14 area is south of town on either side of I-25 (La Cienega on the west, Highway 14 on the east). The terrain is high mesa and lots tend to be one-plus acres. Views are generally long and lovely, and housing varies from mobile homes, to alternative (e.g. bermed-in or strawbale) to traditional Santa Fe style. Further south along Highway 14 (45 minutes to an hour from Santa Fe) are Cerrillos and Madrid, two eclectic old mining towns offering more affordable homes and lots of atmosphere.

The Eldorado area lies about fifteen miles (or 20 minutes) southeast of the Plaza on gently rolling terrain. The Eldorado subdivision now includes about 2,200 homes. It includes a small and pleasant shopping and office complex, a library, a community recreation center, stables and protective covenants. Many lots have lovely views and native piñon and juniper vegetation.

The homes in Eldorado often include modern conveniences and a variety of pleasing styles. A number of builders are active here and values have increased steadily for existing properties.

The Eldorado area includes many other subdivisions (Alteza, Dos Griegos, Los Vaqueros, Old Road Ranch, The Ridges, and Cielo Colorado), with larger lots and generally more expensive homes. Other subdivisions may offer more interesting terrain or allow horse stables. The historic villages of Lamy and Galisteo lie further to the south, each with its own charm.

Traditional Spanish settlements grew up along the fertile streams that run from the mountains to the Rio Grande. Native American pueblos (reservations) straddle the Rio Grande and adjoin the villages to the north of Santa Fe. Tesuque (a village named after the adjacent pueblo) is just north of Santa Fe. Because of its initial affordability, it became a home to artists. Later it became popular, offering a “back to nature” lifestyle for the affluent. Los Caminitos and Vista Redondo are among the subdivisions near Tesuque on the way to the tiny villages of Chupadero and Rio En Medio and El Rito. Casas de San Juan is a superb gated community adjacent to the Santa Fe Opera.

The Nambe and Pojoaque valleys lie about 15 minutes north of Santa Fe on US 285. The traditional farming villages here retain their agrarian charm, in spite of an influx of scientists from Los Alamos in the 50s and some continuing gentrification. Humble, but charming adobe farm houses adjoin verdant large estates, new homes and trailers.