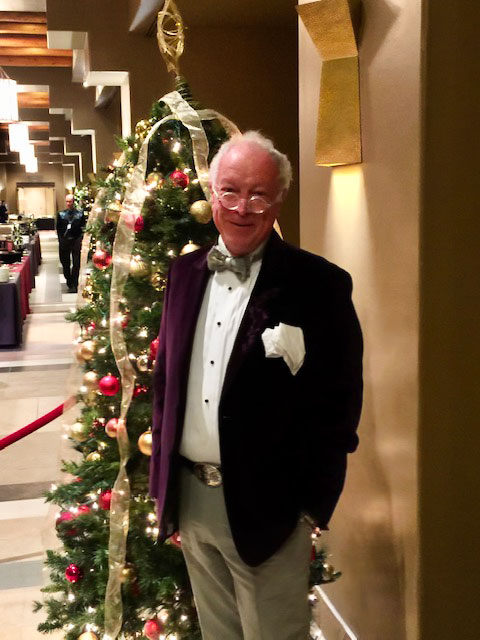 Share
When Santa Fe’s last official gay bar closed several years ago, it wasn’t a one-off, but part of a national trend, with a recent Washington Post article reporting that between 2007 and 2019, 37 percent of the nation’s gay bars shuttered. The picture is even bleaker for women. According to the Lesbian Bar Project, just 21 lesbian bars remain open nationwide.

Fortunately, for almost two decades Santa Fe has offered a monthly social gathering that many regulars consider better than a designated ‘gay’ bar, though with all the essential amenities—The Friends of Dorothy, brainchild of local entrepreneur Ian Johnson.

Friends of Dorothy’s next event is this Friday, December 17, at Museum Hill Café.

So…Where Do People Go?
Ian moved to New Mexico 20 years ago as co-owner of Los Chileros, a popular supplier of Chile products and other southwestern flavors to local restaurants and specialty grocery stores throughout the USA Relocating from San Francisco, he was dismayed that queer-friendly northern New Mexico had such minimal LGBTQ nightlife. While living in the Bay Area, he had been a member of a group called MAX (originally known as Men’s Associated Exchange) that provided gay men with camaraderie-building social. “In Santa Fe, I was sitting at a dinner party telling my friends about the organization. They said, ‘I wish there was something like that here,’” Ian recalls.

Applying his marketing and business-development skills, Ian decided to launch his own version of MAX. “I said okay, look, why don’t I go and try to put something together. I went to a bar and said we might have six people and might have 20. Eighteen people showed up!” And from the humble beginnings of this first outing “Friends of Dorothy” was born.

Hundreds Strong, Inclusive, and Growing!
After almost 20 years, Friends of Dorothy has grown to 700 members. Originally the group was mostly made up of men, but it has since added women and all aspects of the LGBTQ+ acronym as members. The events are held on Friday nights in popular public venues like La Fonda, Quail Run, and Museum Café on Museum Hill. “There’s no cover charge,” Ian says. “I always tell venues that ‘If you’ve got bartenders, you’ll make money.’ And they do.”

But Friends of Dorothy events aren’t limited to bars and restaurants. “Probably our most memorable event was at the Santa Fe Opera,” Ian says.” We held it in the summer just before the season began and a few of the opera apprentices sang and over 300 people showed up.”

Out of necessity, Friends of Dorothy events went on hiatus during COVID, although Ian did host one Zoom event that didn’t take the place of the real thing. “I logged in for about five minutes, but then kind of clicked off,” he laughs.

As more people got vaccinated, Friends of Dorothy came out of hibernation. This past summer, during Santa Fe’s brief ‘no mask window’, Friends of Dorothy hosted its first live event in more than a year. The crowd of 250 packed the roof of La Fonda. “They must have been desperate to get out.”

A Citizen of Santa Fe & The World
Originally from the United Kingdom, this Santa Fe transplant is proud of his three-year-old dual citizenship status. “I’d had my green card forever, but with that man in the White House, I thought it was wise to obtain citizenship,” he says.

And although he’s no longer working full-time, he hates the term retired. “I prefer the phrase ‘became a gentleman of leisure,’” he says. Ian finds plenty of things to do to fill his days. In addition to planning and running Friends of Dorothy events, he is on the advisory board of the Envision Fund which is the LGBTQ+ arm of the Santa Fe Community Foundation, and travels an enviable amount of the time.

Recently returning from Puerta Vallarta, Ian travels the world, usually visiting his wide network of friends. “I get to spend my life traveling, which has been phenomenal, even in COVID times.”

To learn more about The Friends of Dorothy and to be added to Ian’s email list, contact him at ianjohnson@rocketmail.com.