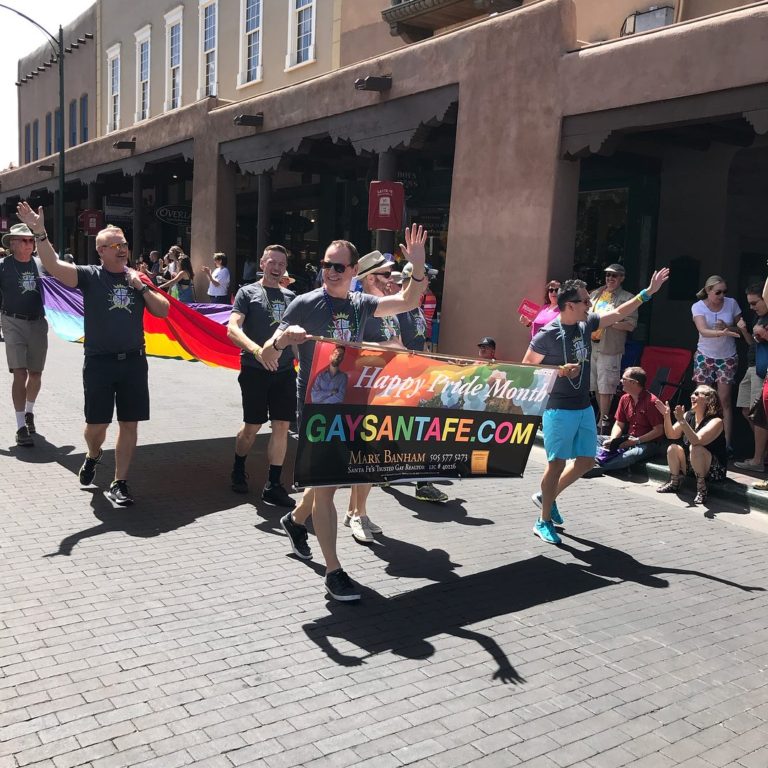 “Last year was the first time I marched in the parade and had an entourage of people and a big banner. In previous years I had a booth on the Plaza,” says Banham. “This year, I’m supporting the event but don’t plan to be as active. I just want to hang out, have fun and enjoy the day.”

And he’ll have a lot to enjoy. With the 50th anniversary of Stonewall this month, The City Different is kicking it up a notch to become The City Fabulous as it honors the LGBTQ rights movement. This year’s Pride-focused events include a larger, more diverse selection than ever, from dances at Meow Wolf to birding!

“It’s a big year and even bigger undertaking,” says Michael Davis, president of the Santa Fe Human Rights Alliance (HRA), organizer of the city’s Pride festivities. Bigger turned out to be an understatement. “I joined the board in January, “Davis says. “And it seems like that within minutes, everybody quit!”

But what could have been tragic, given the milestone year of this year’s Pride, actually turned out to be an auspicious hit of a reset button for HRA. HRA’s 2019 board has more women, people of color, transgender and bisexual representation than any previous year – a suitable metaphor for a time when new colored stripes are added to the Pride flag to celebrate inclusion.

Mirroring the diversity on HRA’s board is a wide variety of new and returning events that cover every LGBTQ angle but remain true to the city. In addition to popular annual mainstays like the Pride Parade, Tea Dance, White Party, Drag Show, and Pride Train to Lamy (which sold out), this year’s festivities offer some new and returning events like the Family Pride Festival, inaugural Pride Movie Night, Art Showcase and Business Mixer – all of which are distinctively Santa Fe. “We wanted to include things that were unique to Santa Fe. Not just the standard party,” Davis says.

These new events brought in partnerships and sponsorships both familiar and new to Santa Fe Pride. “We approached the businesses that typically sponsor Pride and a number that haven’t in the past,’ Davis says. “We found many organizations that were enthusiastic about getting involved but were never asked in the past.” Even an unplanned “conflict” with The New Mexico Gay Rodeo Association’s weekend in Santa Fe promises to be a win/win for Pride festivities with cross-promotion sure to drive ticket sales.

Among the new organizations is the Audubon Society, whose cleverly acronymed “Let’s Go Birding Together” bird-watching event which made its debut in the early hours of Saturday morning, June 22. Stereotypes and anecdotal evidence inspired HRA to approach U-Haul and Home Depot to sponsor women’s events.

Also, of note is a generous sponsorship from tourism app City Swivel, which, according to Davis is the “largest we’ve received at the ‘Stonewall’ level.”

A Seattle transplant, Davis is no stranger to organizing LGBTQ community endeavors. In 2018, as a member of the Los Alamos lesbian, gay, bisexual, transgender, and queer, and questioning employees resource group, he was part of the National Laboratory’s Pride Art Installation that transformed a breezeway into a giant rainbow flag composed of post-its with Pride messages. Last year, the fledgling employees’ group that he helped create was represented at the Santa Fe Pride Parade with a dragon.

In an arena whose organizers and sponsors can sometimes be territorial, Davis has earned some well-deserved props from Santa Fe Pride’s established LGBTQ community for the hard work and high level of positivity he’s brought to organizing this year’s event.

“I’m excited about all the things Michael and his board are doing,” says Banham, “He’s bringing in a high level of energy to the organization.”

This is hardly faint praise, since Banham launched and publishes the popular LGBTQ website GaySantaFe.com. “I’d had websites before that, but when the Gay Santa Fe.com became available, I snapped it up.” Initially, Banham’s site was a way to network with gay realtors nationally and get referrals. But since its inception, it’s become much more to the local community. “Most of the stories on the site are not about real estate at all, but about Friends of Dorothy events and information on what’s going on in the community – including Pride, which I regularly promote.”

For Banham, Santa Fe Pride is more than a yearly event. It’s a celebration of the city and its history of welcoming queer people. Over two decades ago, Banham left conservative Tulsa, OK to make a home for himself in Santa Fe. “It will be 21 years next month. For me, moving to Santa Fe was a chance to be freer, more out…to be myself. In so many ways, Santa Fe is a sanctuary city, without being a big city. Not many cities this size are so welcoming,” he says.

Diverse Businesses on the Plaza

And welcoming is exactly what Santa Fe does best. According to Davis, the over 35 booths on the Plaza for this year’s event will represent a cross section of the city from large companies to an individual sharing information and recruiting people to volunteer to work on the 2020 census.

More civic leaders are expected to turn up for this year’s Pride as well. Thanks to the outreach and the 50th anniversary of Stonewall, more politicians will be attending than ever before, with Gov. Michelle Lujan Grisham and Mayor Alan Webber expected to speak on the Plaza after the parade.

But while the HRA committee is currently steeped in pulling off this year’s events on a shoestring budget and a mere four months of planning, they have their eyes fixed on the future for Santa Fe Pride. Volunteer Coordinator, Mark Westberg is committed to increasing the sense of history and understanding of Pride among his age group (under 30) about the history of the movement before, during and in the years immediately following 1969’s Stonewall riots in New York.

Looking forward to 2020, HRA’s board hopes to have an even more diverse series of Pride events, including more happenings for the LGBTQ community throughout the year. Davis emphasized that a key goal over the next year is to build stronger relationships between pride committees throughout the state in cities like Albuquerque, Taos, Las Cruces, and even smaller communities like Las Vegas. Ultimately, he envisions a statewide LLC that could field questions from tourist organizations, something Banham is clearly on-board with.

“Most people who attend Santa Fe Pride are locals,” Banham says. “I’d love to see us become more of a destination event.” And with new blood like Davis and Westberg energized to work to plan events that are bigger, better, and uniquely Santa Fe, the sky is the limit.

Thinking about purchasing a vacation home or relocating to Santa Fe? Reach out to Barker Realty Broker Mark Banham to learn more about real estate opportunities in the Santa Fe Area as well as the cultural and social opportunities available in this unique, welcoming community.