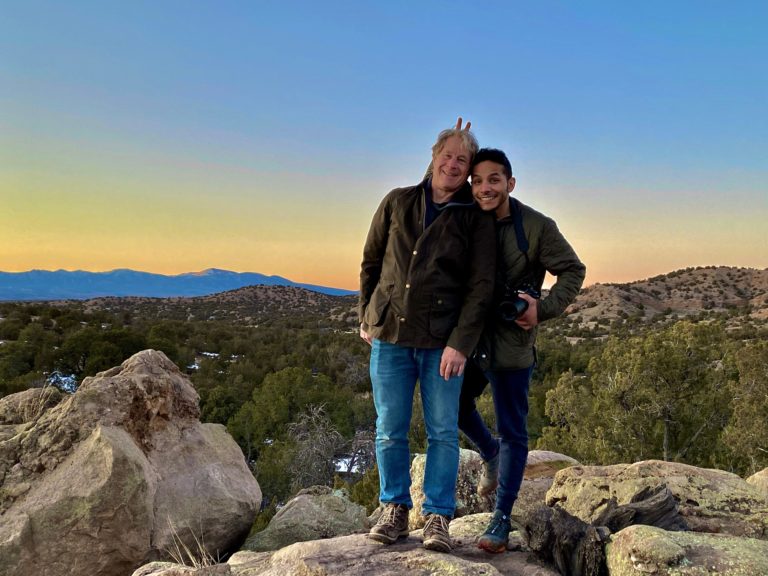 One of the very few benefits of COVID-19’s devastation has been a realization that more of us can work from home than previously imagined. For some, that means relocating to a summer home or the in-laws’ beach condo.

For others, it has made the opportunity to create a whole new life.

That’s at least part of the story of partners Jeff Gibbs and Alex Zuniga, who moved to Santa Fe full-time in February, just ahead of the pandemic. They visited Santa Fe several times and saw dozens of properties with Barker Realty before choosing their forever home near Las Campanas in Las Dos.

“About four years ago, at my last big birthday, a friend of thirty years asked me, ‘Gibbs, where are you going to end up?’ Without hesitation, I said Santa Fe.” “Last year I thought, if Santa Fe is where you know you want to be, and you’re working remotely, why aren’t you there already?” says Jeff, legal counsel to a financial services firm in metropolitan Kansas City. The work transition has been seamless.

Alex and Jeff prove the point I make to couples who are considering Santa Fe—you don’t necessarily have to retire to move here.

Raised on a farm in Ohio, Jeff attended college and law school in his home state before moving to different cities across the U.S. including Kansas City, Miami Beach and Atlanta, where he started a business that coincided with the 1996 Olympics.

Jeff’s connection to the City Different goes back several decades. “I came to Santa Fe for the first time in the early 1980s on a driving vacation through the Southwest. It was my first experience in this part of the country and I almost immediately became enamored by the high desert,” he remembers.

Another close connection to Santa Fe’s celebrated opera brought him back as well. “One of my longest and dearest friendships is with the daughter of my piano teacher who become quite the opera star, Sylvia McNair. She was the headline soprano with the Santa Fe Opera for several summers. Every time she sang here, I would make a visit and spend some time in Santa Fe. In fact, my first major opera experience was when Sylvia performed in Mozart’s ‘The Magic Flute’ here in Santa Fe. It was a nice way to kick things off,” he adds.

“Then I had a dear friend who moved to Santa Fe for a period of time in the 90s. She’s the person who really introduced me to Santa Fe and once she had a place here, I was a frequent visitor.”

Putting Me Through My Paces

Highly methodical, but in different and complimentary ways, Jeff and Alex conducted a thorough home search from the couple’s former base in Dallas, interviewing five realtors before choosing Barker Realty and me.

“When you buy a home, that’s a personal thing. And I’m a bit crazy. So, I insisted on a phone interview with all five realtors. With Mark, we both felt a sense of comfort and connection. We felt secure that we would find the right home with him,” Jeff says.

“We would go through the internet listings and come up with a list and send it to Mark and the next day we would fly here from Dallas”. “I don’t know how many houses we saw; I’m sure Mark would say, ‘All of them!’ We made him earn it.” Alex adds, “He was really patient with us.”

Mostly, they looked near the center of town. “But we didn’t have an articulable set of ‘have to haves’, we just wanted a home that would be comfortable” Jeff says.

“Then we discovered a listing outside of town. On the drive out to see it we passed a listing for the house we chose. And, serendipitously, the owners dropped the price and it fell into our price bracket,” he adds.

“Jeff spotted it first, but when I saw the house, I knew it was the one. We were looking for perfect sunrises and sunsets. We’re both stargazers and wanted a clear view of the Milky Way at night. It was far enough from town, so we have all that,” Alex remembers.

“And we can’t see a neighbor; so social distancing isn’t a problem,” Jeff adds.

A South Texas native, his transition was less about finding a “perfect” home and more about the stress of leaving his friends and life in Dallas, his home for many years.

“I was really attached to Dallas. It had everything I wanted, and for the first few months of looking at houses, I was nervous and apprehensive. I’m glad my disposition and outlook changed after we moved here,” he admits.

“From the first month it was apparent that I do like it here. The people we’ve met are nice and the city is fun and entertaining and we have discovered that, even in the time of pandemic, the food is amazing. After six months, I realized that my anxiety and depression had gone away. Life in Santa Fe is so calming.”

New Mexico’s natural beauty has fed his passion for photography, especially locations like the ski basin, Diablo Canyon (a favorite location just 15 minutes from their home) and Albuquerque’s historic Route 66. He’s also enjoys fishing on the Pecos River, an occasional bike ride to town and the easy road trips around New Mexico.

Since the couple only moved to Santa Fe in February, they’ve missed out on the opera, galleries, museums, most restaurants and the fun of hosting visitors.

“The waiting list of friends and family who want to visit only grows. We have a significant waiting list for 2021, as the ‘new normal’ becomes less restrictive,” they said.