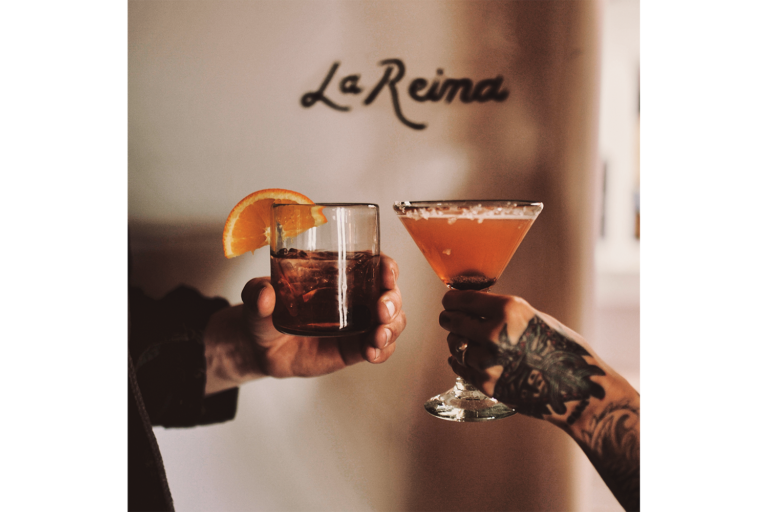 The first time I visited La Reina, the charming bar adjacent to the historic El Rey Court hotel’s lobby, I remember thinking, “I wish this was a gay bar.”

And now—one night a week—it is.

After several years of life without an official LGBTQ+ bar in Santa Fe, this “cozy, smartly appointed venue”* is helping fill the gap with elegance and style through its Monday evening Queer Nights. With a delightful mix of locals and visitors of all ages, it’s a microcosm of what makes Santa Fe special. For anyone who punches a clock on Tuesday, not to worry, the La Reina crowd is equally diverse and welcoming on weekend nights as well.

Billed as a “mezcal bar,” La Reina (which opens at 5PM) always features a core menu of great, not-too-sweet margaritas, along with beer, wine, a few sake options, and signature cocktails like its Negroni Rosa and ‘Manhattanish’ Bonal and Bourbon. During warmer weather, guests can choose between the flattering indoor lighting and enjoying the sunset in one of two shaded patio spaces. One note: food options are minimal. So make dining plans before or after your cocktail hour(s).

La Reina Mondays are fun with a purpose because Queer Nights feature drink specials with part of the proceeds going to the Transgender Resource Center of New Mexico (I’ll share more about this relationship below).

Located at 1862 Cerrillos, not far from The Pantry, the beautifully refurbished El Rey Court is one of several older motor courts built along the former Route 66, and easily the most glamorous of the group.

Built in 1936 on a five-acre plot, its original incarnation became a Santa Fe mainstay. Since then, the motor court has undergone a few changes. In 2016, current owners Jeff Burns, Matt Comfort and Jay and Alison Carroll purchased and transformed the 86-room hotel (renamed El Rey Court) and created its now buzzing bar La Reina.

And it’s at La Reina these days that LGBTQ history is being made and the transgender community receives support one Monday at a time during its popular series, aptly named “Queer Night.” “Queer Night was initiated and inspired by members of our queer-identifying team (hotel and bar staff) and community,” says El Rey Court’s Sales Manager Rebecca Friday. “We slowly rolled out the event by posting on social media, local listings and ‘flyering’ around town.”

The event quickly caught on, but the team at La Reina wanted to give the night additional significance.

A PARTY WITH A PURPOSE

“A few members of our staff and I reached out to Adrien Lawyer and the Transgender Resource Center New Mexico to see if they would like to be a part of Queer Night,” Friday says. Their offer was to donate a portion of drink special sales from each week’s Queer Night to benefit the Center. The offer was music to Lawyer’s ears.

“We do a little bit of vetting and also make sure any fundraising efforts won’t require too much effort from our staff,” said Lawyer, who serves as the Center’s Executive Director of Advocacy. “With La Reina, they’re doing everything. So, we’re just incredibly happy and grateful.”

The no-effort income from Queer Night is welcome to all at the Transgender Resource Center, an organization co-founded by Lawyer. “My really close friend Zane Stephens and I started the organization in 2008,” Lawyer recalls. “We were both trans people having a hard time finding the services and support we needed.”

Since those early days, the organization has grown. After gaining their 501(c)3 non-profit status in 2011, they’ve relocated three times, opened the Thrift-a-Lot store, maintain a staff of 20 employees, and are the go-to resource center for members of the transgender community, not only in the Albuquerque area, but also for large sections of neighboring states Arizona, Colorado, and Texas.

Of the Center’s many accomplishments, Lawyer is especially proud of its Transgender Cultural Fluency Training courses. “We’ve provided over 3,000 trainings for, easily, 60,000 people over the years,” Lawyer says. The list includes public schools, hospitals, police, and fire departments, all of New Mexico’s prisons, 10,000 Waves and both locations of Las Alamos National Laboratories.

MAKING A DIFFERENCE ONE MONDAY AT A TIME

But success comes at a financial cost, so events like Queer Night that offset the Center’s expenses are as vital as they are welcome. In order to keep the crowds coming in each Monday, Friday and her team at La Reina work hard to make each evening fresh.

“We occasionally host live music, DJs, and other free entertainment,” Friday said. “Some acts have included: DJ Omi Loü,  DJ Jennifer Spektor, Author Bett Williams accompanied by Rosemary Carroll,  and DJ Teresa Finley.” When asked what Queer Night fans can expect to see in the coming months, Friday opted to keep us guessing. “We have several acts yet to be announced for the rest of 2022,” she said. “You’ll have to come and see.”