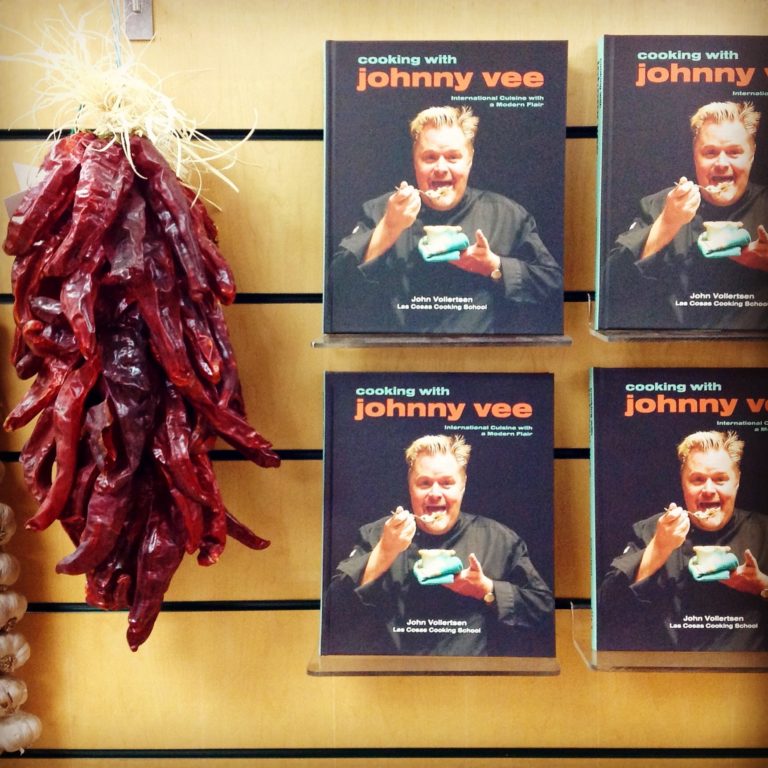 Years ago I attended a memorable birthday party featuring Johnny Vollertsen (aka Chef Johnny Vee), who livened up the evening by inviting guests to help him prepare an elaborate meal.

Johnny doesn’t hide in the kitchen. Instead, he provides a form of interactive catering that involves custom-designing a menu, and then coming to the client’s house and seamlessly integrating the guests into the cooking process.

“It’s more fun for me and for them,” he says. And I agree. After a decade, thinking about that party still brings a smile to my face.

With the holidays at hand, I thought now would be the perfect time to catch up with the out-and-proud chef, who not only caters events, but also runs the highly popular local Las Cosas Cooking School, serves as food editor for Santa Fe magazine, hosts popular cooking segments on PBS, and still finds time to volunteer.

We chatted with Johnny a few weeks back and got him to share a bit about his life, a few distinctive holiday recipes (featured below this article), and the names of local celebrities he’s cooked for (and with).

The story of how Johnny discovered his love of cooking and entertaining, as well as a love for Southwestern cuisine, is intriguing. He grew up in Rochester, NY, bonding with his grandmother, a great cook. “She was a Methodist minister’s wife. So she was constantly cooking for the church potlucks, which seemed to happen every weekend and served up to 200 people,” he remembers.

In high school and through his college years (during which he spent six months in England studying restaurant management), Johnny worked at a Harvey House Coffee shop in Rochester “flipping burgers, making milkshakes and all of that,” he says. “My manager really encouraged me to launch a restaurant career.”

At 23, he moved to New York, started as a prep cook and later worked “front of house,” in a few restaurants. Both experiences made something clear—though he thoroughly enjoyed cooking, he loved interacting with guests even more. “I didn’t want to be just the nameless guy in the kitchen with my head down, always cooking.”

After a few years in New York, an exciting opportunity to work in Australia came his way. He jumped at it. As an American down under, he was first tapped to help develop a Cajun-themed restaurant in Sydney—Jo-Jo’s. “We became famous for being a fun, American concept location. We did parties for touring artists, including Whitney Houston, Jon Bon Jovi and Sting.”

Next, Australia jumped on the Urban Cowboy bandwagon, with Johnny helping to develop and launch Arizona Bar and Grill, which ended up with five locations in Sydney and one in Wellington, NZ. “I was general manager for the whole group.”

He clearly loved the experience, because in 1994 Johnny decided to move here after almost a decade in Australia, and, in 1998, he opened Las Cosas with owners Karen and Mike Walker. Through the years, it’s become a destination for tourists, as well as locals.

“The cooking school began with five classes a week, but eventually settled on three or four, which is just right,” says Johnny, who would lead (and continues to lead) most of the classes, while incorporating appearances by celebrity chefs every few weeks.

Las Cosas balances Southwestern recipes with a mixture of other cuisines. “We teach about 50 weeks a year and probably 60% of our classes are Southwestern themed. We get so many tourists, but we have a strong local following. So we find a balance. We also do Thai, Vietnamese, Italian, French baking, and more.” He adds, “Classes are limited to 12 students at a time and primarily hands-on, full participation. They’re three hours long and include a full meal.”

An outgoing personality, his popular cooking school and years of engaging appearances on “Creative Living with Sheryl Borden” on PBS have turned Chef Johnny into a recognizable local celebrity. “This month I’m filming three more 10-minute episodes. This program has given me great exposure, even outside New Mexico.”

“Ali is so fabulous. We’ve done three fundraisers together, a few for the animal shelter and one for Big Brothers/Big Sisters,” he says.

Johnny’s relationship with MacLaine dates back a number of years. He’s worked with her on fundraising events and cooked for her as a friend.

He laughs that when he’s been out and about with MacLaine in Santa Fe, people who’ve read his column or seen one of his PBS segments sometimes approach him first, rather than the living legend. “Shirley’s like, ‘God, you’re famous.’ It’s lovely when people recognize you.”

One of Johnny’s favorite activities is going into schools, working with K-6 kids, teaching them to cook and understand nutrition. “We have such a huge issue with hunger and nutritional shortages in this state. I want to do what I can to help.”

He’s noticed, however, that he’s teaching a generation of aspiring “foodies.”

“When we were kids I knew how to make a peanut butter and jelly sandwich. Today, they all watch the Food Network; they learn about food from around the world,” he says. “They’re making Ethiopian food and South American food. I just love watching kids getting excited about cooking.”

A brief stopover is home now

On his days off, and in his role as a food writer/editor, Chef Johnny loves to keep up with the ever-changing menus at Santa Fe’s many destination restaurants as well as new and out-of-the-way options. He’s a long-time fan of Geronimo (“If you only have one night in Santa Fe…”), Joseph’s of Santa Fe (“hip and creative”) and the recently reopened Legal Tender Saloon, across from the train station in Lamy.

After so many years here, what made the former globetrotting restaurateur settle in a town with less than 100,000 residents?

“At first, it was the weather. I moved from Sydney and thought this was a small town. I was used to millions of people and having a million different things to do. I thought this would just be a stopover for a few years,” he admits. “But now it’s home and I do find so much to do in our amazing community.”

With Christmas, New Year’s Eve, and other holidays on the horizon, we asked Chef Johnny to share a few of his favorite holiday recipes combining aspects of traditional holiday meals with a Santa Fe twist.

At Las Cosas, he teaches students how to marinate a turkey in a honey/red chile brine before baking (“It makes for an incredibly beautiful color”) and shake up dessert with a red chile caramel pudding, explaining, “We take ingredients we use here frequently and tweak them for holiday recipes.”

The options below include an apple pie with bizcochito crust and a turkey stuffing with a sopapilla base!

** Sopapillas are a local bread similar to the beignets of New Orleans. If they are not available in your area, you can find a recipe in many Southwestern cookbooks. Twelve slices of any white bread may be substituted.