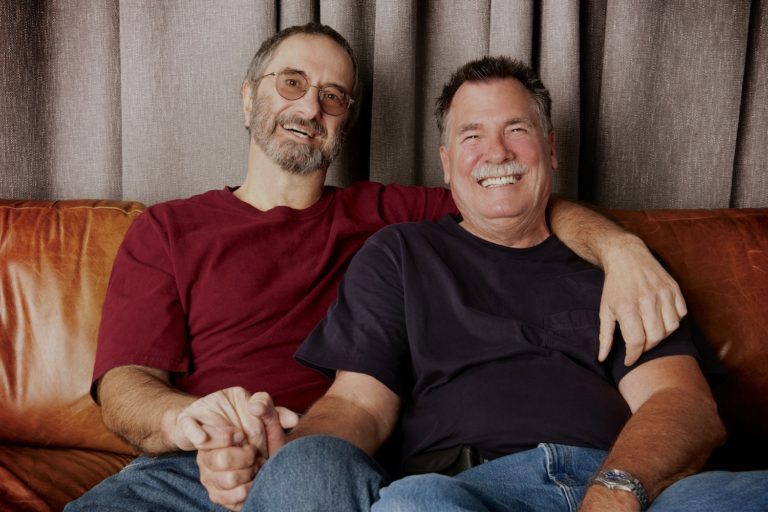 Most people would have considered recent Santa Fe transplants George Bereschik and Art Weiss-Jones lifelong Californians. Originally from Pittsburgh, George moved to the west coast over 40 years ago. Art has bragging rights to having spent even more time in the Golden State.

“Art is a native San Franciscan. He did a brief stint on the East Coast while in the navy,” George says. “But when he was done, he moved right back to California.”

But it would be years before their paths would cross. “We met 10 years ago,” George recalls. “We were both widowed and met at a group for gay seniors in Sonoma County. We’ve been together ever since.”

The couple, who got married on Groundhog Day in 2016, were enjoying their second act in one of the most idyllic parts of the state. But the increasing intensity of the area’s seasonal fires left them constantly worried about having to evacuate their home. September 2020 was the last straw.

“We had talked about relocating for years and kicked around different options. This past fire season we woke up one morning and the sky was orange. The whole landscape was orange, like being on Mars,” George remembers. “I said, ‘Let’s do it.’”

With their minds made up to move, the next decision to make was to where? “We have a lot of friends who’ve been to Santa Fe. They all said, ‘You’ll have to go. You’ll love it,’” George says. “We were predisposed to like it, and we did.”

They planned a road trip in the middle of the pandemic, and, even before they visited, the couple reached out to me. “We simply Googled ‘LGBT Realtors Santa Fe,’” George says. “Mark was the first one. So, Art called him, and we liked what we heard. Mark asked very good questions.”

Both retired, Art and George had a loft in Sonoma County and no desire to take on the responsibility of a yard in their new home. Outside of that, their requirements were limited. “We had a price range and didn’t want anything huge, but also not too small,” George says, adding, “We know we’re going to need a second guest bedroom because we’re going to be SO popular.”

So, we spent the first day of their four-day visit on a marathon day of house-hunting.

“Mark showed us about six properties, mostly in town. A couple would have worked out, but there were things we didn’t really like,” George says. “The last one we looked at was in a new subdivision, a Pulte Homes property on the south side of town. It wasn’t finished, but we really liked the layout and the fact that it was brand new and had a two-car garage. We both agreed it was ‘the one.’”

“It also had two spare bedrooms and two-and-a-half baths, which we certainly liked. It was so well appointed—the colors, the granite, everything.”

They love the location. After years in high-traffic California, being a few miles from the center of town wasn’t a deterrent. “Everyone was telling us about different parts of town, but it wasn’t until we got here and looked at the actual properties that we got a better feel for the city and neighborhoods,” George says, adding that Santa Fe was small enough that properties south of town, for example, were still only a relatively short drive from galleries, restaurants, and the Plaza.

Being self-described “art aficionados,” they were in for a real treat as they enjoyed one of the Santa Fe’s biggest draws – the galleries. “Our afternoon on Canyon Road helped seal the deal,” George says. Ironically, COVID may have made their afternoon in the art district more enjoyable. “We were frequently the only people in each gallery we visited,” Art says.

With their new home close to completion, George and Art are busy making plans to enjoy their new surroundings. They’re looking forward to becoming Southwestern foodies, visiting the city’s museums, and road tripping to White Sands and the Petroglyphs.

An actor and playwright in Sonoma, George is ready to get involved with the local theater scene in the couple’s new home.

“We’re both very impressed with the expansiveness of the landscape.” George says. The next hurdle is acclimating to the altitude. “I take a walk every morning,” he says. “I think I’m almost ready to start hiking.”

The couple is also eager to make new friends in a post-COVID Santa Fe. So far, most of their exposure has been limited to retail clerks, they joke.

“We’ve both noticed that the people here are so friggin’ nice.” George says. “Everyone is so helpful. We’re very impressed with that here.”