Our Fight Against Injustice: Interview with Chad Griffin, President of The Human Rights Campaign 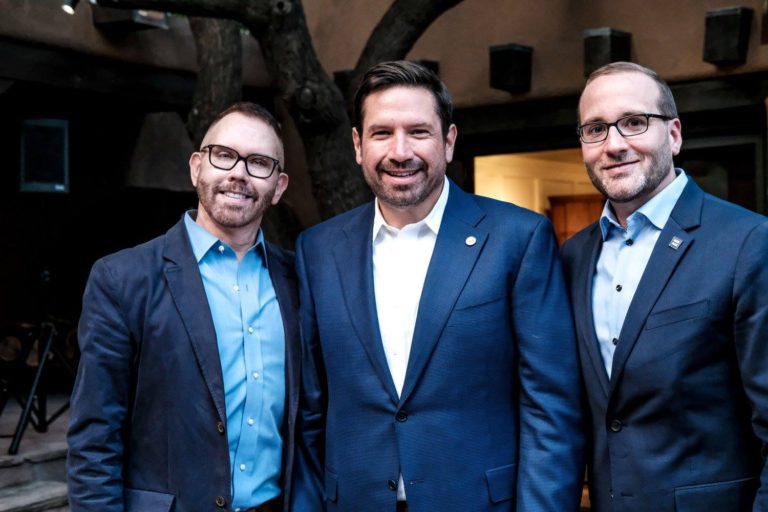 The Human Rights Campaign (HRC)  recently held an event in Santa Fe to raise funds for their growing organization and Santa Fe responded with overwhelming help and support. (Photos of the HRC Santa Fe event.)

“It was great connecting with so many wonderful people, as well as listening to Chad Griffin (HRC President) and his team speak about the HRC’s mission. Mayor Javier Gonzales also attended and spoke in support of the HRC.” said Mark Banham of Barker Realty.

GaySantaFe.com recently spoke with HRC’s president Chad Griffin about Santa Fe, the future of HRC and the current battles the LGBTQ+ community is facing.

What led HRC to pick Santa Fe for your conference?

At the [Santa Fe] event Jacob Candelaria, President of Equality of New Mexico was there, as well as Mayor Javier Gonzales. It was a reminder of the incredibly diverse and committed community that is the city of Santa Fe. My only regret is that I couldn’t stay longer. It’s such a beautiful, vibrant and socially progressive community; especially the LGBTQ+ community. They are [Santa Fe’s LGBTQ+ community] one of the most engaged and supportive communities in the country.

That’s what we are trying to share. Many people move to Santa Fe from across this country and Mark helps many find homes around the area. In addition to moving here for the culture, they come because they enjoy the openness of the community and the lack of segregation in the community. We don’t have a “gay district” or a big separation between the LGBTQ+ community and the straight community. Do you think that is possible in larger cities or other cities across the country that may not be as open?

Our battles these days are coming from our Federal Government or local/state governments. You’re seeing after eight years of progress, our opponents who fundamentally believe that LGBTQ or immigrants or trans people shouldn’t have the same rights as everyone else. They lost many of those battles the past eight years, now they are double down today under this President as he gives license to discriminate as he motivates and elevates some of the worst horrific actions of hate; Charlottesville being a great example of that.

What is inspiring and encouraging is the role that many cities and mayors across this country are playing to ensure that their city is welcoming and diverse. They ensure that all their residences are treated with respect and protection under the law and there is perhaps no greater example than in Santa Fe with Mayor Javier Gonzales. The protections that are enjoyed by Santa Feans is something that is not enjoyed by many people across this country. It’s not only important because it provides legal protection for the community but it also sends an important signal of the values of Santa Fe; values of diversity, inclusion, acceptance and equal treatment of all citizens. I think this overflows into the culture of that city and I think that is why folks across the country find themselves visiting and moving to Santa Fe. I want to give credit to the leaders of Santa Fe. It takes community and civic leaders, like Mayor Javier Gonzales, to ensure that those values are not taken away. I can think of many cities that I wish had a leader like Mayor Gonzales and the civic leaders you have in Santa Fe.

I agree. We’ve been very fortunate the past four years. How can Santa Feans support HRC mission? What can we do here?

You [GaySantaFe.com] have the ability to tell stories and elevate the stories in our community and ally communities. I’ve said it before but it’s worth repeating, our community is as diverse as the fabric of the Nation. LGBTQ people are immigrants, we are women, we are Muslim, we are trans, we are Latino. These days we all have to stand together and stand united and fight for one another because we are living in a time where the Trump/Pence regime on any given day is attacking one or more of those groups. Not only attacking in terms of words and tweets but perhaps in efforts in rolling back fundamental civil rights and fundamental projections in this country for our community and other ally communities. I think it’s vitally important for folks to get to know the dream that is lesbian, gay, bi, trans or queer. It is important for folks in Santa Fe to hear the story of the lesbian or transgender person who relies on Planned Parenthood for basic health care. There is an attempt right now to strip away and rip away funding for Planned Parenthood and to pass a piece of legislation that would make it very difficult and in many cases impossible for folks with pre-existing conditions like HIV and AIDS to have access to affordable health care.

So I would argue that the role that you have and the platform that Mark has today has always been important but has never been more important than it is today because Santa Fe is a socially conscious city and has always stood up, fought back and spoken up against injustice. Those injustices are fast coming these days. I think our community must continue to play a strong role against all effects to roll back the progress we have seen in the last few years. If you look at the late-night rally at the airports, the women’s march, the protest in front of the White House when President Trump attacked transgender troops, you saw LGBTQ people standing arm-in-arm with other ally communities. This continues to happen in Santa Fe and other places across this country.  We have a vibrant community in Santa Fe, many of whom have been our supporters for decides across our 37-year history. I would encourage those who for the first time maybe engaging in civic action against what we are all living under with this current administration to go to our website to learn more about us. Sign up at HRC.org  and become a volunteer and a donor. Those things are critically important for us to win the battles that we are facing across this country and especially with the battles we are facing with this administration.

Visit HRC.org for information on how to volunteer, contribute or donate. There are multiple ways to stay informed and contribute to the advancement of the LGBTQ community. Things change in an instant with our current political landscape so we encourage everyone to sign up for the texting notification. More than 60,000 HRC members picked up their phone and called their U.S. Senator or Representative stop the dismantling of the Affordable Healthcare Act.

We have been fortunate to see equality grow for the LGBTQ+ community over the past eight years but we cannot breathe easy. We are continuously under attack and those rights and protections that we have fought so hard to obtain are taking hits from the current President and right-wing groups across the country. It’s as important as ever to support local LGBTQ+ equality groups like Equality New Mexico as well as our national organizations like Human Rights Campaign.

Hillary Clinton recently spoke at the HRC National Dinner about recovering from the 2016 election and the future battles the LGBTQ+ community will face.