GEORGIA TRANSPLANTS ARE TEXTBOOK EXAMPLES OF THINKING OUTSIDE OF THE BOX 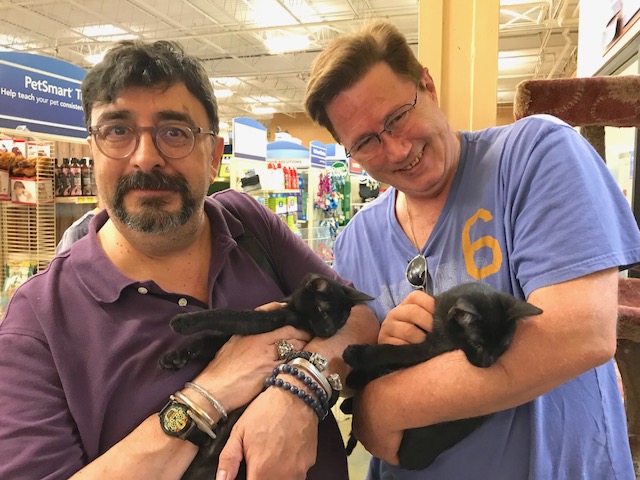 When someone refers to you as “the best gay Realtor in Northern New Mexico,” you do your best to live up to that accolade. Lucky for me, finding the right home for a pair of lifelong friends turned out to be ‘elementary.’

It’s not uncommon for people to look to go back to school when they’re beginning their second act as retirees. And soon-to-be Atlanta, GA transplants Kevin Daley and Joseph Esquibel are taking that trend to a whole new level.

After they were referred to me last year to help them find a large space suitable for four or more people, I was able to locate a charming mid-century schoolhouse which the pair of longtime friends plan to convert into a family compound for themselves and their extended family and cadre of pets.

Kevin and Joseph are part of the kind of modern family that’s been common in the gay community for many years. The pair of long-time friends met over 25 years ago at Atlanta gay bar Burkhart’s when Kevin (who was living in Texas at the time) was in town for the annual Hotlanta River Raft weekend.

Since then, they’ve become fixtures in each other’s lives after decades of friendship. They’re looking to spend their golden years together in a home with their own nuclear family. Relocating separately wasn’t an option,

“Our friendship has already survived sharing a house for 24 years,” Joseph says.

For the pair, the move to New Mexico made sense as they both have roots in the southwest. The fact that their new home will be in a former schoolhouse seems almost genetic.  In 1953, Joseph’s mother’s first teaching job was in a two room schoolhouse in Torreón, NM in the Manzano Mountains where her father, Joseph’s grandfather, was also her first principal.

At the same time, Kevin’s grandmother, an Irish woman who migrated to Colorado and then Albuquerque, had already been teaching in the Catholic and state school systems across New Mexico, something she would continue to do during her 45-year education career.  “She probably taught at (almost) all the pueblos in New Mexico over the course of her career,” he remarks.

Although he’s spent a career working long hours for a well-known Fortune 100 technology company, his lifelong passion has been volleyball. Kevin’s history of playing in college, national, local and international volleyball tournaments led to a large personal network.  So, when Kevin was looking to relocate to the southwest, he reached out to his friend Jeff, a former university volleyball coach who has retired and since become a successful Realtor in Arizona.

“I told Jeff that I was ready to retire and asked him to find me the best gay Realtor in New Mexico.”

But in 2020, a traditional house hunt with multiple site visits in a single day wasn’t going to be in the cards. “We were based in Atlanta and couldn’t just get on a plane and fly out to look at houses,” Kevin says. “We needed someone who was electronically connected and needed to be able to do as much as possible remotely.”

Tech-savvy Joseph (who also works as an executive technologist) saw the need to use 21st century tools in their remote search. “I needed someone who had a team and someone with a sophisticated agency that could use electronic, mobile, and social media,” he says.

And even though they would be handling everything remotely, a personal touch was still a necessity. “Ultimately, we needed someone who understood our unique vision,” Kevin says.

NEW HOME PROVES TO BE A ‘CLASS’ ACT

Like many returnees from back east, Kevin and Joseph originally wanted something in a classic Pueblo Revival or Territorial style. What ended up being their perfect home couldn’t have been further from their original guidelines.

Joseph recalls seeing the listing for their new house on his iPad as he scanned through Mark’s mobile app while sitting on his sun porch almost 1,400 miles away in Georgia. “I saw this house that had been reduced for what seemed like the millionth time and thought, wow, this is a really cool property. I was immediately drawn to it!”

Joseph wasted no time. “I reached out to Mark even before calling Kevin.”

Now located outside Espanola, the house turned out to be the relocated, former schoolhouse built during World War II to serve the children of Manhattan Project scientists working in Los Alamos. Originally built as a two-room schoolhouse, the building has been expanded to include a kitchen and two wings – one with two bedrooms and the other with three.  It’s currently about 3100 sq. ft., but Kevin and Joseph plan to continue in the home’s tradition of reinvention by removing two walls to create two master bedrooms and even install a loft with a spiral staircase in the guest house.

For Kevin and Joseph, it’s all an investment in family perpetuity. “The property will live on past us, hopefully for generations,” Kevin says. “Just because you’re gay doesn’t mean you’re not going to have a heritage”.

Kevin and Joseph’s unconventional search for a home certainly yielded an unusual result for what will be an unorthodox, nuclear household. The house will serve as the full-time home of Kevin & Joseph, as well as Kevin’s two female cousins who want to return to the New Mexico countryside where they grew up.

Currently, one is a bass player in a symphony orchestra in Quebec and the other is a forester in Colorado. Joseph’s extended family from around New Mexico will be visiting frequently as will Kevin’s sister from Louisiana. And their new digs will also be home to their six cats, all rescues—Eoin, West, Caoimbe, Coco, Eric Northman and Valentia.

As for Kevin and Joseph, it’s all part of the modern, nuclear family unit.

“Kevin and I are like brothers, but brothers who actually get along,” Joseph says.