Pride of The Southwest 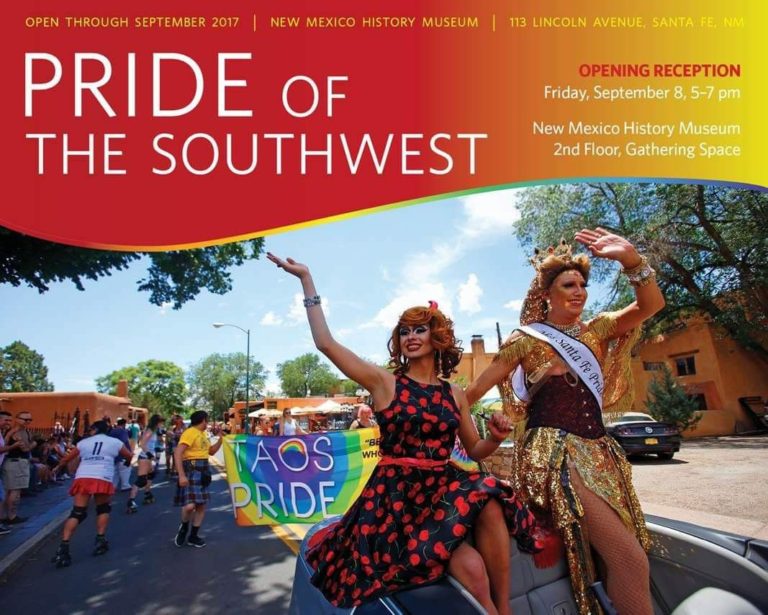 The New Mexico History Museum celebrates a number of the key events that have shaped New Mexico. Traditional history exhibits have included everything from Billy The Kid to New Mexico Pioneers but not very often is “current history” on display. This year for Pride 2017, the New Mexico History Museum will feature Pride of the Southwest which will celebrate our LGBTQ+ Community in New Mexico. We spoke with the reigning Ms. New Mexico Gay Rodeo Association and the Wheeler Medal Award winner for Citizen of the Year Paul Valdez about the current exhibition.

What is the exhibition this weekend for Pride?

The exhibition is called the Pride of the Southwest and it is directly connected to the LGBTQ+ Community in New Mexico. It is the first of its kind in the New Mexico History Museum that celebrates modern history or history that is being made. It’s an exhibition on active history.

What type of items will be on display?

The Pride flag will be on display. It’s a flag that was a lent to us by Linda Cors, who is part of the Jewel Box (Cabaret) and is a producer of the exhibition. Her Pride flag has been with her throughout her life so it has been to a number of places. There are also a few photographs that were lent by the Santa Fe New Mexican. One is titled “Children of the Lost Revolution” and that is of the victims of the Orlando tragedy. The others are Pride Parade photographs with one being Mr. New Mexico Pride 2016. That one is called “The Nouveau Cowboy” and it represents the new type of cowboy; that not all cowboys are straight or gay. Another one is myself and another queen and that one is called “New Manifest Destiny” and it is four queens striving for change. That one represents the manifest destiny which is our community striving for everyday rights that people take for granted. I also have a couple of my dresses from Pride on display.

So this exhibition is really a traditional history institution recognizing modern history?

History is active. It is not passive. When I spoke to the director of the museum, we spoke about how stories like Billy the Kid have been told or stories of New Mexico Pioneers have been told but history doesn’t just stop with those traditional stories. Our New Mexico history is changing and progressing everyday. What’s interesting about New Mexico is that we are a very open and warm community. We are very accepting and want to include everybody. Take LGBTQ+ marriage for example. There wasn’t a large opposition protest because most of us view love as love and marriage as marriage. It’s important we document events like that as they happen.

Santa Fe is a big tourist town so being in a place like a museum exposes visitors to our LGBTQ+ history and events that are currently taking place. They can see how accepting we’ve been.

Well, larger cities and states have had exhibitions for gay artists but few have done an exhibition for the LGBTQ+ community as a whole. We are the front-runners to break the mold and that’s what makes us uniquely New Mexico. We want to show people current history. We want to show the New Manifest Destiny that is currently taking place as we speak.

Pride of the Southwest will run from September 8th – September 30th.