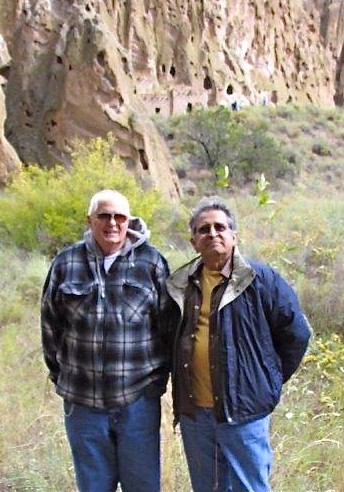 Paul Dominguez and his partner John Wilson have traveled all across the country in their RV. They’ve seen most of what this country has to offer. When they left Texas to bounce from State-to-State there was one place that seemed to stand out more than the others – Santa Fe, NM. After putting off relocating for sometime, Paul and John decided they needed to make the jump from San Antonio, Texas to Santa Fe, New Mexico.

Enter Paul and John with their story…

What led you and John to move to Santa Fe?

Paul: I lived in San Antonio, Texas all my life. I worked for a telephone company until I retired. John and I had been doing some RV camping and visited New Mexico many times. I really liked the state and the Native American cultural so eventually we decided to move. Once John retired as well, we made the move to here (Santa Fe).

San Antonio is a significantly larger city than Santa Fe. How was making the move from there to here?

Paul: Well we lived outside of the county, away from all the congestion. One of the reasons I wanted to get away from San Antonio is the humidity is just unbearable. I couldn’t deal with it anymore.

Also, in 2013 we took a trip to Washington State and they had just passed the same-sex marriage law so while we were up there we went ahead and got married in Port Angeles, Washington. The whole way back, we discussed moving so when we got back to San Antonio we decide we would move to New Mexico. Not necessarily Santa Fe because of my age and as a veteran I wanted to be close to a good medical facility. We looked around Albuquerque, Placitas, Rio Rancho. We couldn’t find anything we liked. I decided to look online for a gay or gay-friendly Realtor in Santa Fe and that’s when we found Mark. He has really been a great friend and asset to us moving here.

John: The Realtor we had for Albuquerque let us down so we found Mark and he was very sensitive to our needs. He knew much more than the Albuquerque Realtor for what we were looking for and it wasn’t long before we found a house that met our needs. It has a place for the RV, it’s fenced in for our dog, it has nice views of the mountains and it was in our price range.

Where did Mark find you a home?

John: We are in the Eldorado neighborhood.

After moving to Santa Fe, did you find a big difference between the LGBTQ+ community here compared to San Antonio?

Paul: Actually the fact that we met Mark has been the biggest asset to moving to Santa Fe because he wasn’t only helpful in finding a home but also through his website we found gay events and ways to meet other people. I told John, I wish we would have done this earlier. This is such a wonderful community. You don’t have to worry about being yourself because of the acceptance of the community. You don’t have to sneak out of the closet to be yourself. That is the biggest thing that has made us feel comfortable about Santa Fe. We can be ourselves. We really think this is the best move we’ve made.

So Mark was pretty instrumental in helping you find not only a house, but really the community as well?

Yes. Right after we moved here he invited us to a get-together at his house so we were able to meet people through that. Also, his website is very informative, like the email list where he sends us information on Friends of Dorothy. It’s been great and it has been because he has been a good friend.